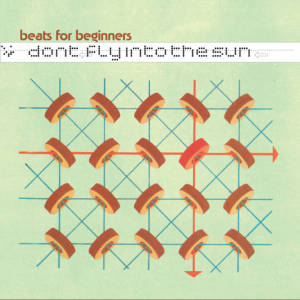 Mixing 80s synths with classic pop backbeats, the first full-length album from Britain’s Beats for Beginners is a brand of electro-pop Nintendo-groove that is part Air, part Postal Service. Their live show of synth players, guitars, bass and drums has gained them fans from around the world and found them rotation on many a mainstream radio station.

What the press said:

BBC…. “With so much attention being paid to the 80s at the moment, it’s of no surprise that ears are turning in the direction of Beats For Beginners, purveyors of the finest electro pop in Manchester at the moment.”

The Independent, 26 June 2004 (single of the week)…. “a fine slice of dreamy electronic alt-pop….a lovely record that juxtaposes a feelgood flavour with a hedonistic streak.”

Logo….. “imagine if Cosmic Rough Riders and Athlete had swapped ideas with Syd Barrett before the breakdown, then double your expectations.” [****]

With a questionable obsession with cats and fear of the future of technology, B4B’s first offering was ‘Kill All Djs’, a urge to end the mundane and seemingly world domination of talentless, over-paid, over-hyped, Djs.

QUESTIONNAIRE
Who are you?
Mike TV from Beats For Beginners

What kind of music can we expect?
Beautifully crafted songs about love, technology and C-list celebrities, via cheap guitars and old synths.

Why the music?
It s the only thing I can do. It comes from a love of 60’s stuff like The Beatles, Doors, Lou Reed and Bowie and a dollop of 80’s panache like Gary Numan and early shit computer games.

What’s plan B?
To purchase an old cold war submarine and take the band on a sea side tour of the British Isles. We’ll play every port in the country, eat fish fingers and catch scurvy, watch our sex bits fall off, discover medieval sea diseases and have a great time. That or get a job. Probably get a job.

Date : 02/11/2005
Will Mike TV Get His Toyota Key Ring?
We know that the Canadian public have fallen in love with ‘Beats For Beginners’ and now Toyota in Canada have done the same. They’re using the track ‘When Robots Attack’ for an advert for their Toyota Dealers. Commenting on the deal Mike TV said ” I’m really pleased that we’ve done so well in Canada. I get emails from fans out there every day and they really love their music. I’m delighted that Toyota have used my music and now the deals done I’d love to get my hands on one of those cool Toyota key rings, ideally with the car thrown in”.

Date : 21/07/2005
Beats On U.S Radio Station Playlist
Beats make it onto U.S Internet Radio station ‘ Radio Indie Pop ‘ major playlist. The New York interenet radio station has added ‘Summer Lovers’, ‘Don’t Fly Into The Sun’, ‘Need You Tonite’, and ‘Death of A C-List Celebrity’ to its broadband radio station. Over 15,000 folks are now tuning in to R-I-P! Please let your friends and fans know to tune in to Radio-Indie-Pop on Sundays, Mondays, Tuesdays and Wednesdays when we will be playing the BEATS FOR BEGINNERS song! http://www.radio-indie-pop.com

Date : 21/07/2005
Beats make it onto U.S Radio station playlist
Beats make it onto U.S Internet Radio station ‘ Radio Indie Pop ‘ major playlist. The New York interenet radio station has added ‘Summer Lovers’, ‘Don’t Fly Into The Sun’, ‘Need You Tonite’, and ‘Death of A C-List Celebrity’ to its broadband radio station. Over 15,000 folks are now tuning in to R-I-P! Please let your friends and fans know to tune in to Radio-Indie-Pop on Sundays, Mondays, Tuesdays and Wednesdays when we will be playing the BEATS FOR BEGINNERS song!

Date : 25/06/2005
Beats For Beginners, A Hit In Canada
News just in from Gord at Aporia Records in Canada is that the Beats for Beginners album ‘don’t fly into the sun’ is doing really well out in Canada. Debuting initially on the campus radio charts at #36, Kill All DJ’s has now risen to #24. There’s even the possibility of ‘Kill All DJs’ being used for one of Canada’s biggest summer TV commercials so we’ll keep you up dated with it’s progress.

Date : 16/03/2005
Beats For Beginners Un-Plugged Gig
Beats for beginners are playing an un-plugged acoustic gig with Dave Potts of MONACO on Thursday 14th April 2005 in the Downstairs Bar @ The Rampant Lion, Manchester and on Sunday April 17th 2005, upstairs at The Fuel cafe bar, Withington Manchester. The Beats will be playing songs from their debut album ‘Don’t Fly InTo The Sun’ along with some of Dave’s new songs. All very laid back and Addmission is Free.

Date : 14/03/2005
Beats For Beginners Rehearsal Room Video
Beats for Beginners have shot a rehearsal room video for their fans of for their track ‘Summer Lovers’. Click here to watch the Video. Well done Mike.

Date : 10/03/2005
Beats for Beginners success in Phillippines
Beats for Beginners are an immediate success over in the Phillippines. Some of their top music journalists who work for National magazine and papers have been reviewing “Don’t Fly Into The Sun’ and here’s what they’ve had to say. Press, which is one of the Philippines most respected monthly music magazines said in this months issue (March 05) “BFB could easily give French synth hooligans, Air, a run for their money…” and finished off the review with the line “British electropop at its finest”. Press were so knocked out with the Beats that they featured their name on the front cover. Mon Castro of The Manila Standard, Philippines daily national newspaper said, “..it’s only a matter of time before these lads from Manchester shed their indie cloak and join the big boys in the newly charged mainstream, which is slowly getting crowded but, hey, there is always space for the brilliance of new geniusus”. The complements continued with Bernie Sim article in Pulp the Philippines leading National Music & Fashion Magazine when Bernie said, “I’ve always found electro pop lovable and mellow, and Beats For Beginner’s initial offering is just that. The band’s musicality is unquestionable…”. We agree! Full articles on the Gallery. Just click on th thumb nail.

Date : 24/02/2005
Beats for Beginners released in Canada
Beats for Beginners have a new home in Canada and they couldn’t have wished for a better one. On the 19th of April 2005 Aporia Records will release “Don’t Fly Into The Sun” in Canada. Aporia is owned by faith & hope’s good friend Gord Dimitrieff and is a similar size company with several artists including Tamara Williamson, Madrid, Mellonova and Lily Frost. Like Faith & Hope, Gord and his team give each of their releases the love and care they deserve. Good luck Gord.

Date : 13/01/2005
Beats #6 in Best Songs of 2004
Having spent the whole year playing the very best in new Manchester music, Terry Christian and his inimitable sidekick Conrad Murray have put together their top 40 list of the finest tunes of 2004.

Date : 29/07/2004
Beats for Beginners massive success
Last nights Beats for Beginners album launch Party of “Don’t Fly into the Sun” at Bighands was a massive success. The beats played a blinding set and I can’t ever imagine Bighands been busier. From 10 till 2 the bar was heaving. Fellow Faith & Hope label mate and Radio 1 Blue Room favourite National Forest played a DJ set and other label mates like Chris from Mint Royale came to give his support. And the buffet? Mr. Gordon Ramsey himself couldnt have done better!

Date : 24/07/2004
“They’re like the UK’s own Scissor Sisters”
Newspaper of the year, The Independent has described Beats for Beginners “like the UKs own Scissor Sisters” in a review posted on the national papers website. The papers reviewer Andrew Gill described the Beats musical influences from “The Beatles, Pink Floyd, Elton and ELO to Eighties electropop”. Beats for Beginners album “Dont Fly into the Sun” is in the shops on Monday (26th of July).

Date : 19/07/2004
“most progressive things happening in indie”.
“…their music is one of the most progressive things happening in indie.” This is how Music Week, the UK’s prominent music industry weekly newspaper, has described “Don’t fly into the Sun” the debut album from Beats for Beginners which is released next Monday (26th July) Faith & Hope FH050CD.