Within a year, their first demo ‘The Coolest Monkey’ was snapped up by the Leeds based Soundclash label, and was heralded as a rowdy leftfield classic, picking up a ‘Single Of The Week’ from the NME. ‘The Coolest Monkey’ went on to grace Radio 1 – courtesy of John Peel – and received glowing reviews from both Melody Maker and Loaded.

With a thirst for the live arena, Los Paranoias gigged relentlessly from day one, playing everywhere from the Sonic Mook Experiment at Scala, and Slack Sabbath at Notting Hill Arts Club, to club nights in Colchester and Brighton, free festivals and beyond. No PA was left untroubled by their sublime, sky-scraping take on live electronica.

Public appearences didn’t stop here however. Through promoting and spinning at various nights in Brighton, Manchester, Colchester, they proved their worth as versatile and unique DJs. Los Paranoias became reputed for their ease of both warming up a room with trippy house and moody breaks, and playing late into the night with all manner of stripped down techy funk and their own club orientated tunes.

They released their third single ‘Queen B / If I squint They Look Like Stars‘ on the 15th March 2003. Previous singles such as Click of Death (24/2/03) and Lies, Lies, Lies impressed fans and critics alike. Their music matured into a sophisticated, often beautiful hybrid of styles. Drawing from a colourful palette of intricate percussion, dubwise sensibilities, rock dynamics, soaring instrumentation and clubby overtones, they honed a unique sound far beyond the sum of its parts. 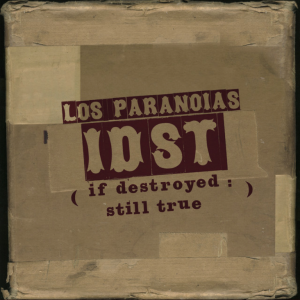 Los Paranoias debut album IDST was a “Classy debut album” (Observer Music Monthly), “magnificent” (DMC Update gave it 5/5), and “If Roni Size were Mexican, he’d have formed Los Paranoias…I’m speechless” (Logo) “It’s consistently, exhiliratingly unpredictable, and how many recent dance records can you say that about?” (Big Issue) and in July 2004, the Los Paranoias boys just missed out on the short list for the Mercury Music Prize.

In January 2006, Los Paranoias’ amazing track ‘Queen B’ was being used in the American TV series ‘Queer Eye For The Straight Guy’ which was a one-hour guide to “building a better straight man” and was awarded the 2004 Emmy Award for Outstanding Reality Program.