Psycho Radio stepped up both guns blazing with an electronic, punky, funky stormer in 2002 when the Italian producer Daniele Tignino, sound engineer Pat Legato, and British vocalist Leroy C Anderson got together and released the much sought after limited 12″ ‘In The Underground’. 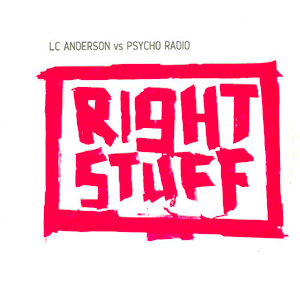 Right Stuff was their second outing and was first spun in Miami by Pete Tong with support building through a variety of tastemakers like House DJs such as Graeme Park, Ali B, Lottie, Tim Lennox Gordon Kaye, Dave Clarke (Galaxy), Paul Woolford and Tony Senghore, who all followed Tong’s plays and took ‘Right Stuff’ to #3 in the Buzz Chart, and #8 in the DJ Magazine Hype Chart for us. The track also crossed over into other areas with regular plays from the likes of Steve Lamacq, Colin Murray, Jo Whiley, James Hyman and MTV.

As well as the UK, in 2003 the track was also released in France (Airplay Records), Italy (Oxyd Records), Denmark (Nice and Firm) and in 2004 in the US (Robbins Entertainment) and Australia (Tinted Records).